POLITICS AND THE NEWS

Our surprising findings on where US newspapers owners stand, politically 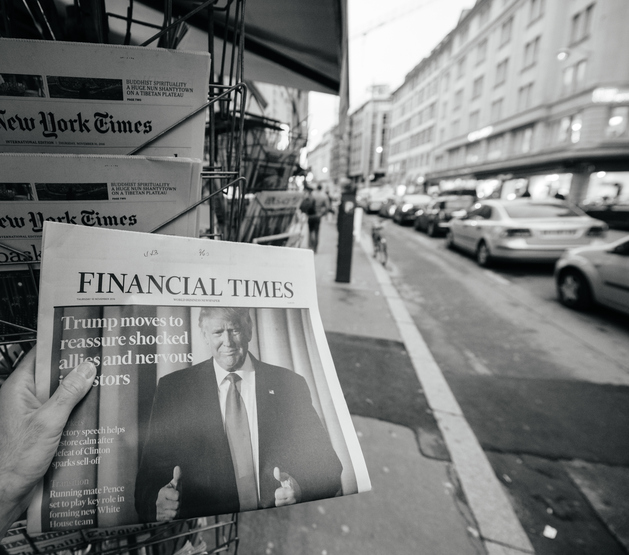 If you’ve ever wondered where the owners of America’s allegedly “liberal” newspapers actually fall on the political spectrum, we’ve got the info right here.

DFMworkers.org recently looked up the campaign contributions of the owners and top executives and shareholders of U.S. newspaper chains. The results surprised us, and maybe they’ll surprise you, too.

Though national dailies like The New York Times, Washington Post, and Wall Street Journal get lots of attention, most Americans get their news from a local newspaper. Five companies — Tronc Inc. (formerly Tribune Publishing), Gannett, The McClatchy Company, GateHouse Media and Digital First Media — together control the vast majority of metropolitan and regional papers.

Digital First Media is owned by vulture hedge fund Alden Global Capital, which in turn is owned and controlled by New York investor Randall Smith. DFM purports to be the nation’s second-largest newspaper chain in terms of circulation.

For years, Smith’s political contributions have been solidly behind the Republican Party, according to data available on OpenSecrets.org. While the reclusive billionaire has been quite politically active in past years, in the most recent election cycle he only supported House Speaker Paul Ryan (R- WI), according to the public records.

In contrast to Smith’s activity, DFM president Heath Freeman has no campaign contributions listed in publicly available donor databases. (Only contributions of $200 or more are public record, by the way.)

The chain GateHouse Media Inc., which owns small-town dailies and weeklies in 36 states, has been — at least until recently — also controlled by a New York hedge fund, Fortress Investment Group and its subsidiary, Newcastle Investment Corp. According to the GateHouse website, the company owns the largest number of daily newspapers in the country.

Confounding the question of who actually owns GateHouse is the fact that its New Media Investment Group, controlled by Fortress, is publicly traded. And to really confuse us, late last month the Japanese firm SoftBank announced it had purchased Fortress.

Adding to the political complexity, SoftBank’s CEO Masayoshi Son (who is also chairman of Sprint) visited then-president-elect Donald Trump in December. Trump said Son promised to “invest $50 billion and create 50,000 jobs in the United States,” according to the Kansas City Star. So it’s unclear now what direction Fortress’s political leanings will take in the future.

Gannett, McClatchy and Tronc are a draw

Top shareholders at Gannett, which is publicly traded and is the largest U.S. newspaper company, don’t appear to be heavily involved in politics, at least where campaign spending is concerned. We ran the names of the top three shareholders and came up with nothing.

McClatchy is also publicly traded. Its CEO Craig I. Forman, a former executive at Earthlink, contributed $4000 to Earthlink’s PAC back in 2006-2007. In 2006, the PAC gave twice as much to Republicans as Democrats, then reversed the ratio in 2008. So we’ll call that one a wash.

As to the Los Angeles Times and Chicago Tribune: Michael Gordon, CEO of Angelo Gordon, a primary shareholder in Tronc, Inc. (formerly Tribune Publishing), gives to a fairly equal mix of Republicans and Democrats.

The biggies appear split, too

The New York Times
Publisher and chairman Arthur Ochs Sulzberger, Jr. has a reputation as a stolid liberal, but has few to no political contributions to back that up. It’s not clear if Sulzberger Junior or Senior made the meager contributions listed in the public record, but for what it’s worth, they’re only a few thousands dollars in the 1990s going mostly to Republican committees and a Republican candidate, former New York Congressman Amory “Amo” Houghton.

The Washington Post
Most of owner Jeff Bezos’ donations go to his Amazon political action committee, which has contributed small amounts to the For Our Future PAC. For Our Future has in turn donated to other PACs that include environmental and union causes. (Among them is the Working America Coalition, which The NewsGuild’s parent union, Communications Workers of America, also supports.)

But other PACs funded by Bezos’ Amazon PAC spent more on Republican candidates in the 2016 election cycle, with one PAC for his space flight company Blue Origin spending twice as much on Republicans over Democrats.

Wall Street Journal
Um, not really much of a guess as to where News Corp owner Rupert Murdoch’s political inclinations lie. Only 20 of his 139 contributions we dug up supported Democratic candidates or committees, and in 2010 his company gave $1million to the Republican Governors Association.

What does this all mean?

Apparently, the political persuasions of the owners and top executives of most U.S. newspapers are pretty equally divided.

However, just because media owners have certain political convictions doesn’t mean their editors, editorial boards and reporters can’t lean the opposite way. It’s a mixed bag, but to claim that U.S. newspaper owners tilt left or right is a risky assumption.