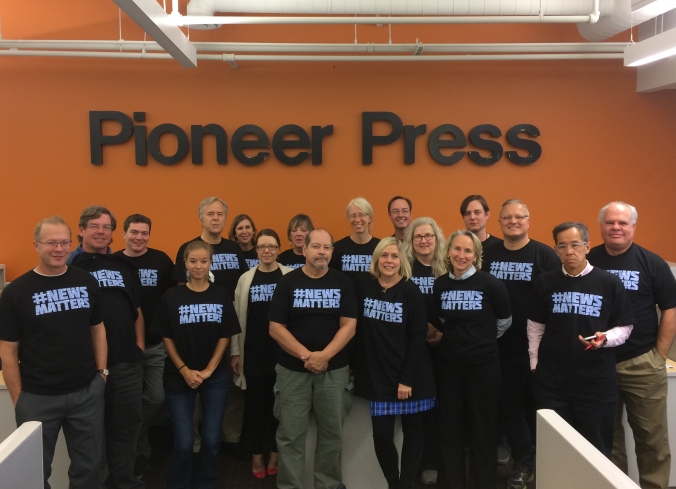 Minnesota’s oldest newspaper is being eviscerated

ST. PAUL >> Alden Global Capital, the hedge fund that owns the Pioneer Press, has cut more than 60 jobs in St. Paul — half of them from the newsroom — since it acquired a majority stake in the newspaper in 2012. That represents about 25 percent of the staff and 1,500 years of experience. Another 182 people lost their jobs when Alden outsourced the printing of the paper in 2014.

And the cuts continue — eight more people have left or will be leaving the newsroom soon in a new round of buyouts.

St. Paul is a great city. It deserves a great newspaper. The Pioneer Press has been an essential source of news and advertising in the east metro for nearly 170 years. Employees at the Pioneer Press have never stopped caring or going above-and-beyond to bring the newspaper to the people who depend on us.

More people are seeing our coverage now than ever before because of the reach of our digital products. The Twin Cities ranks No. 1 among the top 20 markets for newspaper readers and 70 percent of east metro newspaper readers choose the Pioneer Press.

Although the paper remains profitable, Alden Global Capital has continued to cut staff to line the pockets of its investors. The loss of so many reporters, photographers, copy editors, circulation, accounting and maintenance employees has impacted the communities we serve.

It has meant cutting back on local coverage of education, sports, the arts and a large amount of the investigative journalism that holds our public institutions accountable. We publish fewer local photos that visually tell the stories of St. Paul and the east metro. We’ve lost a measure of quality control and institutional knowledge as our copy desk has been decimated. And customer service has suffered because of staff cuts on the business side of the newspaper.

It’s time for the community to reject Alden Global Capital’s irresponsible management of its newspaper. We’re asking civic-minded community leaders to step forward and help the Minnesota Newspaper and Communications Guild, the union representing Pioneer Press employees, find a local owner that values the important role this newspaper plays in the Twin Cities.

On Tuesday, Oct. 25, Pioneer Press union employees are wearing T-shirts with the slogan #NewsMatters to draw attention to our need for a local owner.

Anyone interested in helping us find a local owner is asked to contact the Newspaper Guild at (612) 789-0044.