When Regina Shainline joined the circulation department at The Mercury in Pottstown, Pa., she never imagined she’d have to take on an extra job just to get by in her chosen profession. But in 2014 she had to hire on at her local Walmart, because while the cost of living soared, her pay didn’t keep up.

“It’s not easy,” she says. “I’m 58, and believe me, we’re not luxurious people. We’re just average people trying to pay our bills.”

Shainline is a district manager for Digital First Media, the nation’s second-largest newspaper company in terms of circulation. She’s also one of the hundreds of DFM employees who, despite constant layoff fears and the frustration of increased workloads, have chosen to stay on because they’re passionate about their work and fierce believers in the importance of journalism.

Nearly 1,000 employees at a dozen DFM papers have gone years without raises — in some cases, a decade — while many have had to live with deep cuts in earnings and benefits.

Shainline says it’s been “nine or 10 years” since employees in her department have seen a raise. One woman has waited tables and taken on paper routes to make ends meet, she says.

At other DFM papers, employees are teaching, copy writing, and renting out rooms to help pay bills.

“We bring home less now than we did in 1997,” says Dave Levengood, a circulation supervisor who’s now in his fourth decade at The Mercury.

Levengood says the loss in earnings over the years is due to the lack of raises combined with increased benefit premiums paid by workers.

“Let’s be clear: DFM and nearly all — perhaps all — of its papers are profitable.”

At the San Jose Mercury News, many employees are now taking home $12,000 less each year, according to union representative Lisa Krieger, a reporter and co-chair of the Guild unit at the paper. The wage and benefit reductions there have caused real compensation to decline 14-16 percent in inflation-adjusted dollars since 2008, due to salary freezes, loss of 1 week vacation and furlough days.

Stagnant salaries, benefit and wage cuts are just part of what news business analyst Ken Doctor describes as DFM’s overall strategy of “milking the company as much as possible.” 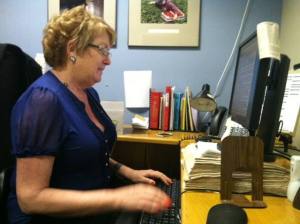 In Monterey, Calif., reporter Virginia Hennessey left her job after more than 21 years of award-winning investigative reporting. Her new career? Being a self-employed private investigator.

Hennessey says she works less but has doubled her income.

“I set my own hours and work in my bathrobe if I feel like it,” she adds.

Since Hennessey’s departure, other Herald reporters have moved on to more lucrative endeavors. One was hired by the local “alt” weekly, which offered better salaries than The Herald, while another left for a higher-paying, non-DFM newspaper. One reporter discovered that working part-time as a freelancer netted as much as she earned working full-time at The Herald. 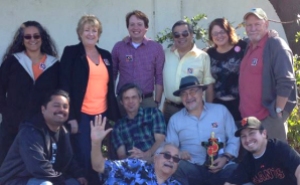 The once-robust Herald editorial team (plus one former employee). Less than two years later, only four employees shown in this photo still work at the paper.

As employees struggle to pay mortgages and support families, this steady brain drain is affecting the quality of news operations all over the country. And DFM’s policy of maintaining stagnant or declining salaries is making its papers even less competitive at a time when the industry is already hurting.

“I don’t see it getting better in my time,” Levengood says. “But I’m hoping for others it does.”

While loyal employees are bearing the brunt of tougher times in the industry, DFM and Alden’s owners and shareholders are reaping ample benefits.

“Let’s be clear: DFM and nearly all — perhaps all — of its papers are profitable,” Ken Doctor writes on the website for Harvard’s Nieman Lab. In early 2015, he says, “profits ran to about $125 million a year overall. In fact, profit margins at some of the smaller papers — even as they cut further — reach into the low 30s.”

Such levels were once rare in the newspaper industry — back in the 1980s and ‘90s, 15 to 20 percent was considered a healthy margin for many newspapers.

In response to this inequity, union employees at a dozen DFM newspapers across the United States have united to launch a campaign for raises and fairer working conditions. The effort comes at a time when all of the locals’ contracts are up for renewal.

Union leaders are promoting the campaign with the hash tag #newsmatters. In the coming weeks, the News Matters campaign will be rolled out on this site, at facebook.com/dfmworkers  and via the Twitter feed @dfmworkers.

“We are taking this action because we see no other alternative,” union officials said in a statement when the campaign launched Jan. 13. “Isolated as individual bargaining units, we have faced total shut-out from DFM on raises, even as valued employees leave the papers, week after week, in search of more equitable workplaces. …Together, we will be far more effective making real gains for employees.”

“It would be wonderful to get a raise,” Shainline says. “We’d just like them to show us a little more money for what we do every day.”