While employees at its newspapers are being laid off and others have worked for years without raises — many taking second jobs to make ends meet — Digital First Media apparently has enough spending cash to buy yet another paper, the bankrupt Orange County Register. 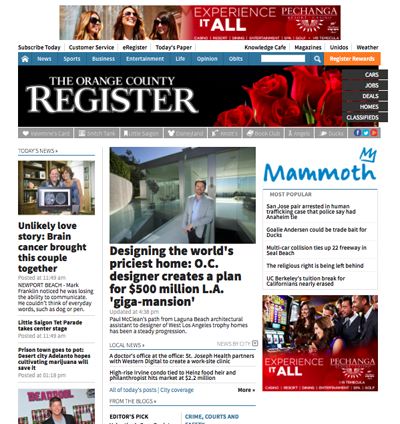 A few weeks ago, DFM asked a federal judge to push back a court deadline so the company could try to buy the Register when its assets go up for auction.

The motion was part of bankruptcy proceedings for the Register’s owner, Freedom Communications.

Court documents show DFM’s request was granted, and the new deadline to get in on the “Stalking Horse” bidding was last Friday, Feb. 12.

A Stalking Horse bid allows the Register’s owners to choose a minimum bid from any companies making offers. The expression is an old hunting term referring to a horse that hides the hunters as they sneak up on their prey. If a Stalking Horse bid is accepted, that sets the minimum bidding amount for the actual auction, scheduled to take place March 16. A judge could approve the sale March 21.

Freedom could simply sell to the winning Stalking Horse bidder instead of going to auction. With a court holiday on Monday, no announcement has been made yet as to whether an offer was accepted.

DFM eager to buy, despite cuts and layoffs

In a Jan. 25 court filing, DFM attorneys said the company wanted to get in on the Stalking Horse process, but needed more time than the initial Feb. 5 deadline allowed. “This proposed deadline is not feasible given the large number of debtors’ executory contracts and unexpired leases,” DFM attorneys told the court.

As part of the bidding process, any potential Stalking Horse company must disclose its own value. But DFM’s lawyers said that because it the firm is privately held, it would only share its financials if Freedom signs a confidentiality agreement.

DFM was also concerned it might at some point be designated as a competitor and therefore wouldn’t have as much access to Freedom’s financial data as other bidders.

The Register is Freedom’s flagship paper, but it also owns The Odessa American (Texas) and a number of smaller newspapers.

According to financial statements filed by Freedom in December, the company’s debts amount to $219 million, while its assets are worth around $59 million.

Court records show DFM is poised to buy, despite drastic and continuing cutbacks at the papers it already owns.

“DFM is interested in acquiring (Freedom’s) assets,” the company’s filing states. “DFM has been in regular contact with debtors through their counsel and other professionals regarding its concerns, and they have all been cooperative and responsive to date.”

DFM is controlled by Alden Global Capital, a vulture fund that buys up bankrupt companies and invests in economically distressed nations such as Greece. Alden unsuccessfully tried to sell all of its DFM papers last year, and has continued cost-cutting in order to maintain profits. Its most recent layoffs include reporters from the Monterey Herald and Santa Cruz Sentinel.

Employees represented by The News Guild at 12 DFM papers have launched a national campaign called #newsmatters, demanding better working conditions and raises. Many employees have gone for years — some even a decade — without any raises or cost-of-living increases.